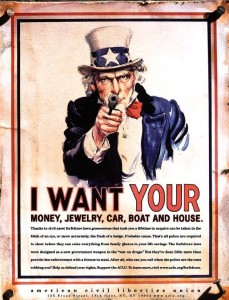 We added a page about Asset Forfeiture under the Criminal Defense tab of this website for anyone who has suffered losses from an unfair asset forfeiture by the police. In addition to that page, we decided to add a blog post about this topic because of some exciting news regarding changes to the civil assets forfeiture laws that will help, not hurt, the public.

Civil forfeiture, once again, is defined by the Institute for Justice as “the government power to take property suspected of involvement in a crime” even if the owner was not charged with a crime. The government/police sell the property and keep up to 80% of the proceeds for itself, or seizes cash to use for personal gain. This process was made possible through the “Equitable Sharing” program, which allows state and federal police to collaborate and share the seized cash or property. One of the most common ways a seizure can start is by a police officer pulling a driver over for a minor traffic violation and using that instant to push the driver to allow a warrantless search of the vehicle. The police officer will then do his best to find some probable cause to seize the car or any cash in it, which at that point, the owner will have to hire a lawyer to prove that he was not involved in criminal activity and retrieve his property.

According to Policing for Profit: The Abuse of Civil Asset Forfeiture, this process of asset forfeiture and equitable sharing started as a part of the war on drugs thirty years ago. There were good intentions with this program: to lessen drug trafficking as much as possible by giving law enforcement officials a way to quickly stop suspicious individuals who were likely involved in criminal activity. It also helped return the money as a form of compensation for victims of drug trafficking and funding for “drug treatment and drug education programs.” However, over the years, it lost its original meaning and became a way to allow the police to pervert the law in order to help themselves. Now, law enforcement agencies use asset forfeiture and the loophole of equitable sharing as a bullying mechanism to take from innocent people under the guise of helping the general public.

However, there is hope. The Washington Post just released an article about Attorney General Eric Holder and his policy that aims to end this police thievery. It does not allow law enforcement to use federal laws to unfairly seize cash. It only allows the police to seize property that causes a genuine public safety concern, such as “illegal firearms, ammunition, explosives, and property associated with child pornography,” among others. In other words, no longer can the police stop you for a minor traffic violation and use that as a way to take your money. Law enforcement officials can only seize your property if there is clear criminal activity happening in that instant. It has taken some time, but there is finally a first real step forward towards ending bogus cash forfeiture.

If you are one of the many who have unfortunately lost your property due to these civil forfeiture laws, call Attorney Edward Johnson for help today. If the police have seized your cash, our team can retrieve it for you WITHOUT charging you for attorney fees. No cash? No problem! We will get you your money back, and we will ask for a small percentage of the seized cash. Call us today at 708.606.4386.